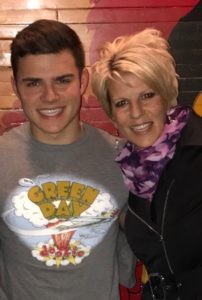 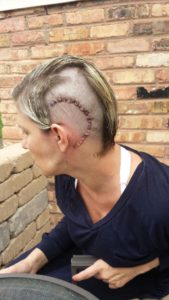 I had the pleasure of meeting Kelly, at our Luvabulls reunion/rehearsal in February for the March 5th Bull’s game. I was immediately drawn to her because she was witty, friendly and fun. It wasn’t until the 2nd rehearsal with her that I heard her story. WE ALL HAVE A STORY but hers is quite amazing regarding all she’s overcome. I asked her if I could share it with all of you since I know most all of you with be inspired by her strength. She agreed. Read below 🔽

19 years ago I was involved in a near fatal car wreck. It took my dancing career away, it took my education careers away, and it also Took me away from my 1 1/2 year old son. After the accident I had some brain damage and extensive pain in my face. I was diagnosed with something called trigeminal neuralgia. Trigeminal neuralgia is known as “The worst pain known to mankind” and is dubbed the suicide illness due to how many people commit suicide who have this. I am in pain every second of every day with a burning sensation in my face with intermittent electric like pains that happen in between.  These pains caused me to pass out and have seizures. I have not driven in over four years due to the passing out and seizures. I have not been able to work in many years either.

The year after my accident, I decided that I was not going to let this illness beat me and so I followed a dream I had always had, which was try out for Chicago Luvabulls. I was ecstatic when I made the team. I was on Luvabulls For two years and coached for the Junior Luvabulls as well. Unfortunately, due to my illness there were many things I could not do while on the squad. However, just being a part of it was exciting. After being on the squad for two years, I realized that I needed to move on as I could not really fulfill my duties of being a member of the Luvabulls. I found myself wishing that there were something more I could do with my life.  I thought about going back to college, but it just seem like too big of a challenge to take on. I had always wanted to do make up and worked in a salon prior doing it without a license

so I decided to go to cosmetology school because it was only a 15 month program and I thought I might be able to complete that. During cosmetology school, I had to take a number of leaves of absence due to my illness, but I am proud to say that I graduated and received my license. I started working for a hair salon but was too ill to really succeed at it. Due to passing out many times at the salon, I received a letter from their corporate office basically asking me to resign from my position. I fought that because I knew that that was illegal for them to do so. Having that said, I did not enjoy working there and felt lost trying to mix color because of my brain injuries.I found myself feeling lost and so I decided to quit my job and go back to college.  College was very difficult because of my brain injuries. I worked with the disability center and was ultimately able to graduate with a 3.6 GPA average. I received a degree in education. While doing my student teaching, I passed out in the girls bathroom and two third-graders found me lying in a pool of blood.

Needless to say they did not want me to come back. This was devastating and really made me feel very low.  Not long after, I decided to look for jobs in sales that were more flexible for my illness.  I got a job doing outside sales for a company and I am proud to say that I became the number two sales rep that they had out of over 2000 employees in the United States. That Feeling was phenomenal but was very short-lived. I became too ill to continue this job.  I coached a competitive dance team for four years while I was going to school and working. The year following I had three more brain surgeries and two surgeries where they did implantations, two Brain surgeries for the pain and another brain surgery to implant a device for the pain. The other surgery was and implantation for my seizures. Unfortunately, none have seem to work. To date I have had 29 surgeries and six brain surgeries.

I spend my days at home unable to drive and without much to do. I have made a conscious decision not to let my illness or my history bring me down.

All of my successes and accolades that I had are now a thing of the past. That being said, I am now a new me. I might not be able to do the things that I did before, but I know how much the things that I CAN do now matter in a whole different way. I am proud to say that I have raised a beautiful, compassionate, and successful young man. He is 21 years old and is away at college. There are many things I miss about my old life, but I am now blessed with a wonderful fiancé, a beautiful 21-year-old son, and two wonderful stepchildren.

Many people look and my situation and feel sorry for me. Many cannot understand how I deal with all of this. The way I look at it is that there are so many people out there who have it a lot worse off than I do. I am still walking, I am still talking, and most of all I am still alive. There are many that would be thankful to be where I am at right now. Life is good. It’s just how you look at it.  Visit Kelly Crean on Facebook.